pSPICA is a CG force field developed with a "polar" CG water model. The CG modeling scheme in pSPICA is almost the same as that in the SPICA FF. The full details of pSPICA can be found in the publication. The pSPICA FF is developed using the polar CG water model containing a dipole within the particle as shown below. 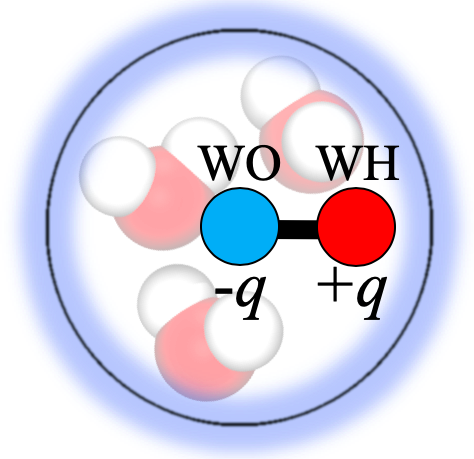 where εW and σW are LJ parameters. The prefactor of the LJ12-5 function is decided to have the minimum value as -εW and to attain zero at rij = σW. This functional form and the LJ parameters are optimized to reproduce the experimental density, surface tension, and dielectric permittivity of water.
For electrostatic interactions in pSPICA, the relative dielectric constant (εr) = 3.2 is used. Different from the SPICA FF, the charge values given in the topology file are not scaled by the square-root of relative dielectric constant (εr) = 3.2. So the relative permittivity value should be given in the job control script explicitly.